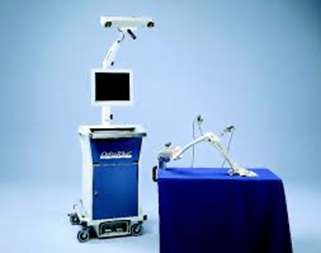 Total Knee Replacement or Total Knee Arthroplasty has been indicated with growing frequency, especially over the last decade. The success of a total knee replacement depends on various medical industry factors, such as component design, the quality of the material used to make the components along with the manufacturing process, in addition to clinical skills of your treating physician such as adequate patient selection and the surgical technique.

Most of the industry factors have been improved over the course of last two decades and the evolution of the medical industry has enabled great advances in the design, quality and material of the total knee prostheses available. In addition, the development of surgical instruments and tools that have the aim of assisting in and improving the accomplishment of the surgery by the operating surgeon has also vastly contributed to the improvement of the results of total knee replacements. Within this field, the most significant advance over the past decade has been the emergence of navigation systems or computer assisted surgery for total knee arthroplasty or robotic surgery.

Computer Assisted Orthopaedic Surgery (CAOS) or Navigation is a field of technological evolution that has been developing particularly over the last 10 years and is one of the most significant advance in the field of total knee arthroplasty. It provides surgeons with a precision tool for carrying out the surgery with the possibility of intra-operative simulation and objective control over various patient specific factors and their body characteristics.

Since the first systems, which were basically used to control the alignment of the operated limb via bone cuts, many other surgical steps have been incorporated, such as component rotation on the thigh and leg bones, knee ligament balancing which is intrinsic to optimum tension in the knee during various functions of the knee and arranging the symmetry of the knee during various movements among others. The efficacy of CAOS or Navigation as a precision tool with an effective capacity for promoting better alignment of the lower-limb axis has been widely proven in the literature.

The CAOS or navigation system is composed of a computer with the specific software and an optical infrared tracking camera. This system is fed with anatomical reference points of each limb of the patient that is acquired during the surgical procedure. A infrared enabled pointer helps with transmitting the various anatomical references to the navigation system. The surgical instruments required to perform a total knee replacement also have adaptations to hold rigid bodies containing infrared transmitters. The patient specific information such the alignment of the limb, amount of wear and tear, any bone loss in the knee or any bony deformity outside of the knee or muscular contracture, etc is transferred to the computer via infrared signals. 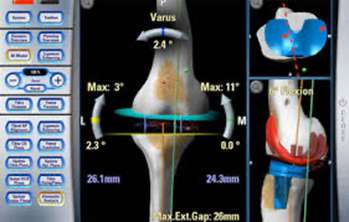 The first navigation systems for total knee arthroplasty aimed to control the alignment of the limb by dictating the bone cuts so as to obtain correct limb alignment. Today, several other parameters have been incorporated into the navigation system, such as the size of the components and rotational alignment of the components, the balancing of the ligaments of the knee, which are key stabilisers of the knee in day to day life, equalisation of the pressures in the knee compartments during various knee activities.

The navigation system used for total knee arthroplasty is therefore a precision instrument for carrying out the operation, and it also has the potential for aiding the surgeon in making intra-operative decisions, through the resource of simulating actions of the knee before implanting the total knee prosthesis.

Conditions that impose difficulty in using conventional positioning cutting guides for total knee replacements, such as the presence of hardware/implant material obstructing the access to the medullary canal, and/or conditions that imply that the ligament balance is more complex, such as in cases of major deformity inside or outside the joint or in patients with previous orthopaedic surgery make the use of the navigation more significant. Likewise, another situation in which navigation has great potential for application is in minimally invasive arthroplasty, in which the reduced direct viewing of the surgical field can be compensated by the virtual reference provided by the navigation system.

Complications and disadvantages relating to the use of navigation systems have also been described. Feeding the system through palpation of the anatomical reference points and carrying out dynamic manoeuvres is time-consuming. There have also been some reports of cases of fracture at the pin fixation sites in the tibia and femur. However, these are isolated reports, and there is no evidence that the incidence of peri-prosthetic fractures is greater than in non-navigated total knee arthroplasty.

The impact of using navigators for total knee arthroplasty is well proven. There are many studies in the literature with good levels of evidence proving that navigation-assisted surgery has greater precision for obtaining the desired alignment for the lower limb, there is evidenced of possible parallel benefits relating to a lower thromboembolism rate and a lower level of bleeding with navigation.

At Joints & Sports Clinic, the use of navigation systems for total knee arthroplasty is an accessible option. As with all new technologies, there are difficulties and even resistance among surgeons, who view the system with caution, mistrust or even disbelief. However, we at Joints & Sports Clinic, believe that CAOS systems should be regarded as a tool that is at our disposal, which adds power to our knowledge, in giving our patients an optimal outcome but at the same time it should not be regarded as a substitute to the clinical skills of orthopaedic surgeons and as the only factor in improving our patients outcome.