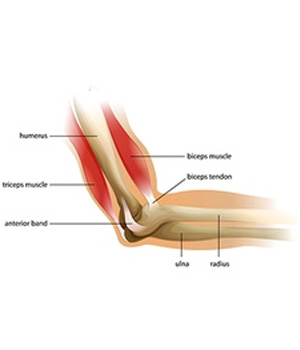 The elbow joint is a complex hinge joint formed between the distal end of the humerus in the upper arm and the proximal ends of the ulna and radius in the forearm. The elbow allows for the flexion and extension of the forearm relative to the upper arm, as well as rotation of the forearm and wrist. The rounded distal end of the humerus is divided into two joint processes – the trochlea on the inner side and the capitulum on the outer side. The pulley-shaped trochlea forms a tight joint with the trochlear notch of the ulna surrounding it and on the lateral side, the concave end of the head of the radius meets the rounded, convex capitulum to complete the elbow joint. The loose union of the capitulum of the humerus and the head of the radius allows the radius to pivot as well as flex and extend. The pivoting of the radius allows for the supination and pronation of the hand at the wrist. An extensive network of ligaments surrounding the joint capsule helps the elbow joint maintain its stability and resist mechanical stresses making Elbow Fracture/Dislocation a major injury. Because so many muscles originate or insert near the elbow, it is a common site for injury. Repeated strenuous striking while the muscles are contracted and against force – such as that occurring with the backhand stroke in tennis – causes strain on the tendinous muscle attachments and can produce pain around the epicondyle. One common injury is lateral epicondylitis, also known as tennis elbow, which is an inflammation surrounding the lateral epicondyle of the humerus